So yesterday I want on my first ever biking event. It was a 32.7 mile course (there was also a 62 and a 100 mile route, but baby steps) , costumes welcome but not required and all funds raised we’re going to the Habitat for Humanity. It was also my first ride over about 12 or 15 miles and, being an idiot, I was too nervous to sleep the night before hand. 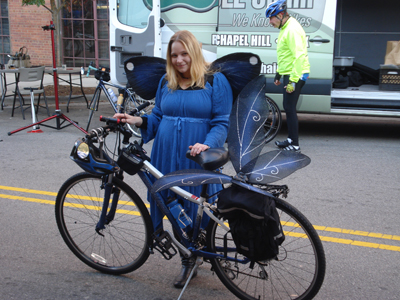 It being a Halloween bike ride, costumes welcome, I decided to go in my blue fairy costume. I couldn’t really wear my whole costume so I dressed myself up in bike tights, a couple layers of warm gear (it was cold!), a little blue asymmetrical fairy dress, and the soft, lightweight boots I generally wear when I expect to be running up and down trails at larp. And of course the butterfly wings… and it only seemed fair to dress my bike up, so she got a pair of butterfly wings too. I felt a little secure about the way I looked ’cause hour glass figures shouldn’t wear babydoll cuts unless they want to look pregnant. Usually I’d wear a bodice with this dress, but I figured breathing might come in handy on the ride. Dunno if I made the right decision there. ^_~ When we got there, it was even more embarrassing because there might’ve been a whole 10 people dressed up as something other than Serious Cyclist. But franky, I was on a heavy hybrid bicycle, I’d never biked more than 12 miles, so the idea of being serious about it was already ridiculous and I figured  I might as well go with maximum silliness. My only regret is I didn’t think to buy about 30 blue helium balloons to tie to the back of my bike. Next time!

I ran around meeting lots of people and exchanged contact information with a couple to start regular bike rides – I’ve been looking for people to ride with who aren’t… 20 mph for 50 miles kinda people. Woo, Sunday at Tyler’s and then community service! We also lucked out into meeting Chris before the race. Abiding by rule #3 (If you have the chance to pee, do so) I dashed into the YMCA 20 minutes before the race start and on my way back someone called out “Awesome wings!” to which I said, “You should see my bike’s wings!” The fellow took me at my word and followed me with his bike where we all met. Chris is awesome! Also on a hybrid bike, he’s 47 and has only been biking a few months longer than Scott and I. It didn’t take us long to decide we should all ride together and despite the fact that he was way more capable on the ride than I (even peddling ahead and coming back for me a few times, which I think might be a killing offense for now on), he was delightful company. I made it through about 5 miles talking politics and and American social-economic situation with him. Chris, for the win!

The ride itself was pretty good. We had a lot of police support keeping traffic off our backs which was awesome and most of the cars we interacted with were very kind. Only two instances standout as being dangerous – impatient drivers, risking the lives of everyone on the road and keeping my heart rate outside of its target range. ^_~ We set off at the end of the pack – being irrationally dressed and on slow, heavy bikes we didn’t want to block anyone who had a hope at winning the race but my immediate goal became to avoid ever seeing the sag wagon (a car that follows along behind the last person in the race in case of doom or sudden sanity) and we quickly pulled into what I think was the middle of the pack and stayed there. The back end of the middle of the pack, but I never saw the sag wagon again.

At 15 miles, we started looking for the rest stop, thinking intensely of snacks and gatorade. We found the rest stop at 18.2 miles and I discovered why people do endurance sports. It’s the orange slices. I headed first to the cookies, but the thought of eating them made me want to die (WHAT?! How is that possible?!) so I was going to chew on my power bar when I noticed the tray of orange slices. Boys and girls, I have never tasted anything so good as those four orange slices. They were sweet and juicy and filled me with an indescribable joy, while also turning me into an amusingly sticky mess. Chris secured us three unsliced oranges and we stuck them in our panniers, to keep our spirits up in case of extreme duress later. The nice thing about the rest stop being almost 2/3′s of the way into the race was the knowledge as we peddled off that we’d already done way more than half the ride and the End Was Nigh.

Not fast. Not strong. Not quitting

I’d never really biked more than 12 miles at a go before so going almost 33 was a bit of an undertaking. I got myself through a few miles by reminding myself, “This is more than I’ve ever done before. This is a new standard of bike achievement. I’m doing this”, but the mantra quickly wore out. I got through miles 23-26 taking to Chris about politics and the future of the world but after that I started focusing intently on the ground in front of my handle bars and the cycling computer slowly ticking away the miles. There was never any question of me not finishing the race though. I am not strong, I’m am not fast, but I won’t quit. It amused a lot people to no end to see me with my wings on my bike with her wings and they kept asking me if it wasn’t hard, lacking the aerodynamics and all. I finally started telling them that if it got too hard, I was just going to fly home. I repeated this many times.

At one point a well suited fellow on a road bike passed our little trio of heavy riders, pumping hard. “I’m sorry!” he said as he passed us. “I just can’t let myself be led by a butterfly!” “If you think that’s bad,” said Chris. “You should’ve seen it when she was a caterpillar!” We played leap-frog with him for a couple of miles, taking turns passing each other until we started the final climb up MLK that would take us onto the bike trail we’d ride to the finish. I knew the end was coming but by that point even small hills were killing me and that final climb knocked me off my bike. I dismounted and marched up part of it, but biked the rest of the way. As we pulled into a trail intersection volunteers directed us to use the crosswalks and told us we were just 3 miles out of home. Bless their hearts. 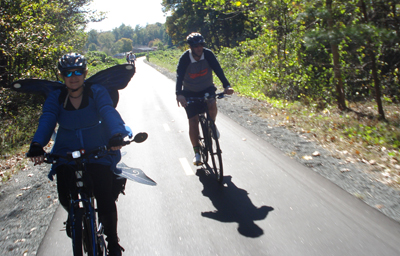 American Tobacco Trail shall henceforth be know as Home.

Tobacco Trail is beautiful – it’s paved and lovely, with little benches and mile markers all along it. I ride it at least 6 times a week, to school and to Tyler’s Taphouse, so I know all the places where it goes up and down. As soon as we hit trail my whole mood improved and I was full of joy, playing passing games with Scott and Chris. “Two miles to our beer!” We told each other at each distance marker. “One more mile until that cider!” We crossed the finish line to cheers, applause, and no few giggles (those darn wings again) in just under 3 hours, with about a 20 minute break at the rest stop. Several local restaurants turned out in support and each rider got a bracelet for two free drinks from Tyler’s (I remain full of love for that place) while the local Italian place filled us full of pasta. Other people showed up all the time, plying us with free smoothies, popsicles, sliders and fries.  I met a bunch more people, doing my social butterfly thing and I’m looking forward to my next Sunday ride to Tyler’s and then the Co-Op, which should be in some truly awesome company.

The only downside was… well, it’s hard to explain. I didn’t feel proud of myself or accomplished when I crossed the finish line, I just felt tired. I had a really good time and I’m glad I did it, but the first time I ran a 5k all the way through I was so happy I cried. I think it’s because I didn’t train for the ride. I had no idea how fast I would do it, or any goal to beat so when I finished it was just a  “Yep. I did that.”, with no idea of whether I did well or poorly. I think my next riding event will be much better ’cause I’ll have a clear goal to achieve and when I do (without wings, how could I not?), I’ll know I’ve improved. The goal of the Arienna is, after all, not to be strong but to become stronger. Still, y’all know I’ll do another one, if only for the orange slices. ^_~

Also, my desire for a road bike is stronger than ever. I love my hybrid and it’s what I really want for my daily riding and hauling all my stuff around but it’s really not suited to going very far or very fast. Anyone need a kidney? Low milage, hardly used. Motivated seller. ^_~

This entry was posted in Uncategorized and tagged biking. Bookmark the permalink.